A family that has recorded rainfall for more than a century has been officially acknowledged by the Australian Bureau of Meteorology (BOM).

John Molesworth was thanked on behalf of the Molesworth family at a ceremony on Friday, 30 August, for their dedication to measuring rainfall at the historic Ballark homestead.

The Molesworths have recorded rainfall since 1889, with records contributing to Australia’s national climate database.

“Efforts like these – and particularly the long-term, reliable efforts – it may only be a little bit of time every day, it really adds up,” said BOM State Manager Dr Andrew Tupper.

“Long term climate records are gold for our climatologists, our examination of climate change and of natural variability, and our understanding of place,” he said.

“The Bureau may be the custodian of the climate record, but volunteers like the Molesworths have helped make it happen.”

Mr Molesworth said he checks the rain gauge – a round, bronze object located a few metres away from his house – every day at 7am.

“These days, people look at their phones, and they’re all expects on the weather; [for] farmers, weather is a really important management of farming,” he said.

Although he’s been observing the weather for decades, Mr Molesworth has doubts about the current discourse around global warming and climate change.

“People are saying we’re heading for disaster…the climate is forever changing, but I believe it’s all happened before, what we’re going through now,” he said.

“My father before me, he took a lot of notice of the weather; he also said if we knew more about nature, we’d know a lot more about the weather.”

The current Molesworth family have been on site at ‘Ballark’ since 1954 when John’s father Bob took over the property from his grandfather John Matheson Molesworth.

John resides at Ballark with his wife Liz, daughter Kate with son James, Claire and sons Sam and Will. 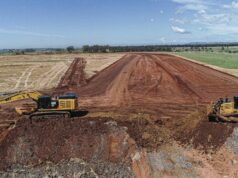 WIN is a win win for region

Turbines not quite at turning point

Planting the seeds of change