Star brothers Brian and Nick Graham have left Darley Football Club to join West Footscray in Division Two of the Western Region Football League. The shock departures’ come on the back of a club still in limbo, yet to find a coach after Heath Scotland’s move to take up a development role with North Melbourne.
While the Grahams’ exit was amicable, Devils Football Manager Craig Baker was not disillusioned by the double blow.
“It’s very disappointing,” he said.
“We’re all well aware of the influence Brian has had on the playing group in his three years here,”
“And we thought Nick was ready to peak given a second season with us, but unfortunately that won’t be happening.
“They’re class players, Brian a three-year BFL Team of the Year Member and Nick of course, 48 games with Carlton – difficult to replace,” Baker said.
Brian 27, who joined the Devils with coach Heath Scotland in 2017, leaves the club with the fondest of memories.
“I love the club,” he said.
“If Darley was around the corner, I would play there for the rest of my life.
“But I have a five and a half month old daughter, and I live and work in Melbourne,” he said.
“It’s purely a lifestyle decision (the move), the balance makes more sense.
“And I can still have a kick around with Nick and enjoy my footy.
“Even taking a year off (from footy) was an option.”
Graham said, “It’s certainly not a ‘money’ move.”
Brian leaves the club a Best and Fairest winner (2017) and Premiership player (2017) following 40 influential games. Rival teams no less, will be happy to see the back of him.
Nick finished sixth in the Henderson Medal in his debut season with the Devils after his move from Carlton. One would be fair to assume, his best for Darley was still to come.
While the Devils remain without a coach and digest the loss of the Graham brothers, cross town rivals Bacchus Marsh are proud to announce their second key signing ahead of 2020. The Cobras have secured the services of former Essendon listed player Bryce Carroll – the 185cm midfielder joins his former Bomber team-mate and newly appointed playing coach of the Cobras, Tom German.

Tiggerlong gets a jiggle on 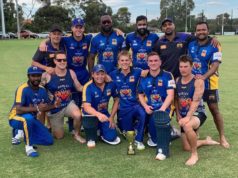